I am pleased to welcome you to my baby quilt entry for the Blogger’s Quilt Festival! This quilt is another oldie but goody… I started it in Afghanistan in March 2011 or so, and was pieced using my Featherweight (you can see it in the bottom right corner in the photo below). This design is “Daisy Chain” from “Jelly Roll Quilts” by Pam & Nicky Lintott. This is the throw size, sans border.  I think the fabric was Lily and Will – the pink version. 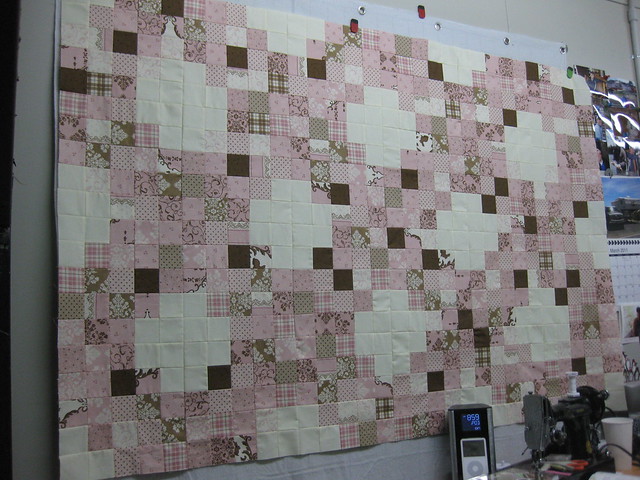 I longarm quilted it this summer.  You too can have me finish up long overdue WiPs as part of Quilts Actually. 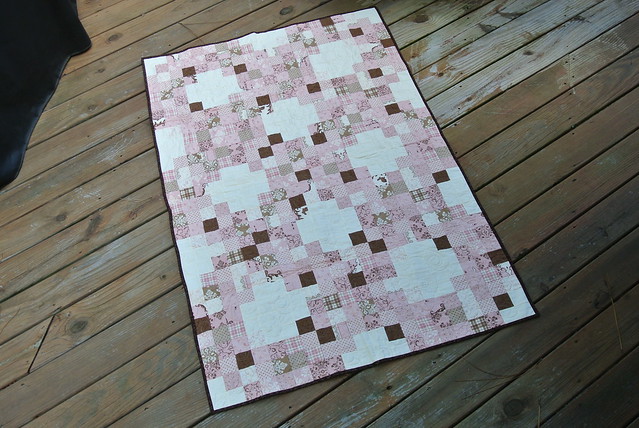 The binding and backing is by now looking familiar if you see my work.  When I started quilting I bought this brown fabric as backing formy first quilt.  I bought way too much and it has been used in two quilt backs, and three bindings so far.  I say so far because there is more fabric left.  Luckily it works with a wide variety of my quilts!  The back is mostly flannel – the pink houndstooth you see below. 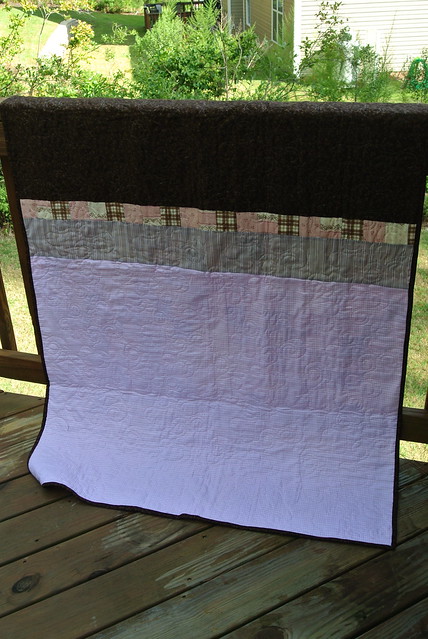 This was once again finished during camper quilting.  My featherweight and I can do great things together while my husband watches the baby.  It is quilted with a light pink thread in a heart panto design. 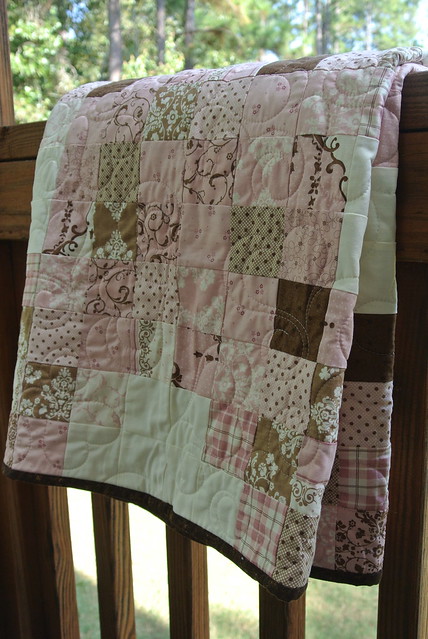 The colors are most accurate in this rolled up shot – it is such a sweet baby quilt. 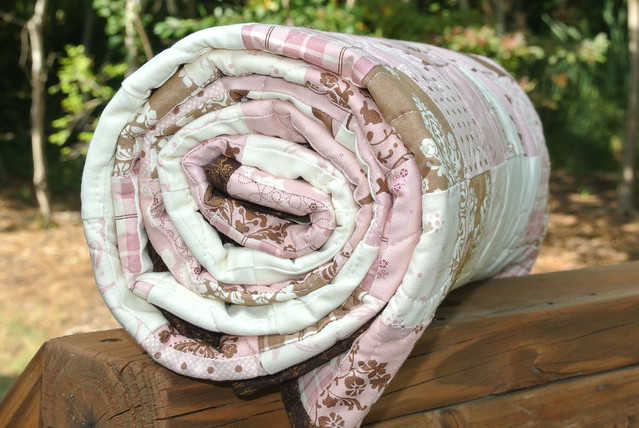 Linked to: Blogger’s Quilt Festival Fall 2013 and Finish it up Friday!

I was very excited to participate in Kids’s Clothes Week for the first time!  This is pretty much what I got done for the week, but I was showing real time progress over on Instagram throughout the week.

First, the plan.  There have been many versions of the plan.

Version 1 – make 3-4 bonnets to last through winter into spring, 2 O+S seashore dresses, and a fall themed pinafore.   Now, why did it seem like a good idea to make two O+S summer dresses in October?  I wanted one as her Army vs. Navy outfit, and figured while I was at it I should also make the next size up for next summer.  I wanted the upper portion embroidered with the Army logo, but after many hours of searching I realized West Point has its copyrights locked up so tight you can’t even find a legitimate way to do what I wanted to do.  Also, realistically we are going to be sitting on our couch watching the game so it doesn’t matter what she wears.  Seashore dresses out.

Version 2 – I bought a serger (yay!), so what better time than the present to learn how to use it?  I saw Bimaas and leggings in my future.  Turns out the serger doesn’t come with thread and the instructions I need to watch on a windows computer.  My windows laptop died over a year ago.  Moving on…

Pinafore: The pinafore needs two buttonholes.  In my defense, my regular machine decided it doesn’t want to sew without leaving huge thread nests from the bobbin so this was/is on hold while I bought a vintage buttonholer off eBay for my Featherweight, which is what I’m sewing on this week.

The pinafore is using the free pattern from Smashed Peas and Carrots.  I added the pockets on one side, and fall appliqué on the other side.  It is made of linen, and once I get buttons put on will be super cute. These in-progess pictures show the idea.

Baby mittens- version one and two complete.  The concept is good, but my daughter has really long fingers so they just barely fit.  This was my priority because it was 40 degrees several mornings this week and she doesn’t like to keep her hands under the blanket.  I used the tutorial from Speckled Owl Studio.  The only challenge was that tutorial was really meant for newborn mittens to keep babies from scratching themselves as opposed to winter gloves, so I had to do some adjusting.  I used corduroy and fleece to warm them up.  I am still working on sizing because my second version was too large and she just pulled them off her hands in two seconds.

Bonnet- this bonnet makes my heart heavy.  I absolutely love how it turned out!  The problem is that it is huge!  Her old ones were getting small so I decided to go up two sizes, and it will not fit this winter.  Maybe next week I can face making another smaller one.  This matches the pinafore perfectly, so it would be a shame to not have her wear them together.

Winter Quick Change Trousers: I used the pattern from Handmade Beginnings by Anna Maria Horner.  The last pair I made was huge, so I reduced the front piece by an inch on each side.  This was probably a little too aggressive, about 1/2 inch would have probably been perfect.  I also added the tuxedo strip for some fun.  The butt is also the gray elephant fabric, and I love the elephant butt on these!  The inside shown is flannel.  The large size is nice in winter because they do fit over her knit pants.  I used the width reduced 9 month size with 12 month length.

Fleece Booties: Also a must in the cold.  I used the tutorial from Dorothy Was Here.  I used the size exactly as is, and they fit my 8.5 month old perfectly.  I will probably have to size them up for another pair before the winter is over.  I would also like to try using the non-stick fabric on the bottom like she suggested, but I couldn’t find any at my fabric store during Kids Clothes Week.

The combined result of this efforts is my little warm girl below 🙂  Although, we did add two more blankets because it was freezing this morning.  Not too bad for a week’s effort!  Kids Clothes Week has been a blast and I can’t wait for the spring version!

Edited to add:
Linking up to Show and Tell, Made By Hand, and Make It, Wear It.

I often feel like an impostor when I sew clothing.  I am self-taught and learn a lot of things the hard way.  Then, when I was watching Project Runway several weeks ago the winning designer (Alexandria) used chambray and the judges loved how she used the fabric!  It made me feel a little better about myself.  I am not an impostor when I used the same fabric in these shorts, and used it before Project Runway did.

That is not to say I am by any means anything other than a beginning seamstress when it comes to clothing, but I think I make nice quality garments for my daughter.  If they weren’t, I would not let her wear them and I wouldn’t waste my own time to make them.  There are already too many cheap, ready to wear options to waste time and fabric on substandard homemade substitutes.  I aspire to fully support high quality and ethically produced clothing, but time and financial constraints exist.  That was slightly deeper than I originally meant to go.

Now, on to the shorts.  These are the ever popular Elegance and Elephants Bubble Shorts in size 6 months.  The fabric is a blue chambray that is a nice weight for baby shorts.  It was a little more challenging to sew with than regular quilting cotton because of the edges fraying more than I am used to.  However, the fraying issue was not bad enough to deter me from sewing with this fabric again.  It is enough of an issue that the seams need to be finished though.  I used french seams to finish mine.

My daughter’s favorite part of these shorts are the tie.  What’s better than a string to play with that you can’t drop or lose?

One final parting shot of her adorableness and the irony of childhood – every toy she could ever want and one of her favorites is an old remote.