In preparation for warmer weather, it was high time to make some shorts for my 1 year old daughter.  I needed a quick finish, so I actually made the exact same shorts I made her last summer – the Elegance and Elephants (E&E) Bubble Pocket Shorts.  I also made them in chambray last summer.

This summer I sized up and made the 18M/2T size, and they are a little big on my little girl.  Width wise, they are fine (need to tighten up the elastic a little), but they are loooong!  And she is tall, so that tells you how long they are.  It’s hard because the sizing choices are 6/12 month or 18 month/2T.  I think there really needs to be another size in there for the little ones.  One the plus side, they should fit for this entire summer, and possibly next summer.

This summer I had the advantage of constructing these shorts with my serger, and they took much less time!  Last summer, I didn’t have a serger yet so I had to finish every seam and it took forever.  On the plus side, I think finishing the seams that way created a slightly nicer finished garment, but not so much nicer that I would do it instead of the serger.

The fabric was purchased from JoAnns last summer.  It has the texture of a seersucker, but isn’t quite.

If I make another pair of these, I am going to attach the bottom binding the pre-serger way.  I prefer the look of attaching the bottom as binding and enclosing that bottom seam.  It also shortens the shorts a little bit that would have helped with fit.  I also think it made the bottom hem lay a little bit neater.  I would pull out the pair from last summer to demonstrate, but they are deep in the attic land of too-small clothes.

In the picture below, they are riding up a little bit so you don’t see just how long they are.  Her hat is my favorite Little Betty Bonnet.  I made the 12-24 month size as the directions call for.  This is at least my 6th version of this pattern, so it’s a winner!  I love a little girl in a bonnet, and this is her spring one.

The mortar in the background is from the Castillo del San Marcos National Monument in St. Augustine.  A quick spring break trip to see Great Grandma (or Nonna-Nonna as we call her) was what necessitated the summer clothes while it was still chilly here in North Carolina.  The preview of spring/summer weather was amazing!  Although I can’t complain too much because I think we may finally have spring here to stay with warmer weather and blooming flowers.  Even if it was 20 degrees this morning (it’s supposed to be back in the 70’s this weekend – sorry north!)
Update for the 30/30 challenge:
1. COMPLETE: Two blocks for my “Real World Red & White” Sampler.
2. A shirt for me.  I’ve been wanting to make my own clothes for awhile, so why not start?
3. COMPLETE: Get ready for spring!  I need at least one pair of shorts for my daughter, preferable more.
4. COMPLETE: Acknowledge that spring is not here yet, therefore make a couple pairs of pants for my daughter.
5. Complete the March Stash Bee block – that’s not a real goal, more of a must finish, but I think it still counts (and makes this list a little less clothing heavy). – working on it!

I was very excited to participate in Kids’s Clothes Week for the first time!  This is pretty much what I got done for the week, but I was showing real time progress over on Instagram throughout the week.

First, the plan.  There have been many versions of the plan.

Version 1 – make 3-4 bonnets to last through winter into spring, 2 O+S seashore dresses, and a fall themed pinafore.   Now, why did it seem like a good idea to make two O+S summer dresses in October?  I wanted one as her Army vs. Navy outfit, and figured while I was at it I should also make the next size up for next summer.  I wanted the upper portion embroidered with the Army logo, but after many hours of searching I realized West Point has its copyrights locked up so tight you can’t even find a legitimate way to do what I wanted to do.  Also, realistically we are going to be sitting on our couch watching the game so it doesn’t matter what she wears.  Seashore dresses out.

Version 2 – I bought a serger (yay!), so what better time than the present to learn how to use it?  I saw Bimaas and leggings in my future.  Turns out the serger doesn’t come with thread and the instructions I need to watch on a windows computer.  My windows laptop died over a year ago.  Moving on…

Pinafore: The pinafore needs two buttonholes.  In my defense, my regular machine decided it doesn’t want to sew without leaving huge thread nests from the bobbin so this was/is on hold while I bought a vintage buttonholer off eBay for my Featherweight, which is what I’m sewing on this week.

The pinafore is using the free pattern from Smashed Peas and Carrots.  I added the pockets on one side, and fall appliqué on the other side.  It is made of linen, and once I get buttons put on will be super cute. These in-progess pictures show the idea.

Baby mittens- version one and two complete.  The concept is good, but my daughter has really long fingers so they just barely fit.  This was my priority because it was 40 degrees several mornings this week and she doesn’t like to keep her hands under the blanket.  I used the tutorial from Speckled Owl Studio.  The only challenge was that tutorial was really meant for newborn mittens to keep babies from scratching themselves as opposed to winter gloves, so I had to do some adjusting.  I used corduroy and fleece to warm them up.  I am still working on sizing because my second version was too large and she just pulled them off her hands in two seconds.

Bonnet- this bonnet makes my heart heavy.  I absolutely love how it turned out!  The problem is that it is huge!  Her old ones were getting small so I decided to go up two sizes, and it will not fit this winter.  Maybe next week I can face making another smaller one.  This matches the pinafore perfectly, so it would be a shame to not have her wear them together.

Winter Quick Change Trousers: I used the pattern from Handmade Beginnings by Anna Maria Horner.  The last pair I made was huge, so I reduced the front piece by an inch on each side.  This was probably a little too aggressive, about 1/2 inch would have probably been perfect.  I also added the tuxedo strip for some fun.  The butt is also the gray elephant fabric, and I love the elephant butt on these!  The inside shown is flannel.  The large size is nice in winter because they do fit over her knit pants.  I used the width reduced 9 month size with 12 month length.

Fleece Booties: Also a must in the cold.  I used the tutorial from Dorothy Was Here.  I used the size exactly as is, and they fit my 8.5 month old perfectly.  I will probably have to size them up for another pair before the winter is over.  I would also like to try using the non-stick fabric on the bottom like she suggested, but I couldn’t find any at my fabric store during Kids Clothes Week.

The combined result of this efforts is my little warm girl below 🙂  Although, we did add two more blankets because it was freezing this morning.  Not too bad for a week’s effort!  Kids Clothes Week has been a blast and I can’t wait for the spring version!

Edited to add:
Linking up to Show and Tell, Made By Hand, and Make It, Wear It.

I have a four month old that likes to sleep for only 20 minutes at a time.  That makes creating challenging to say the least.  I’ve been mostly trying to finish up old projects which means working on quilt back which are not as exciting, which is why I generally lose steam at the end of a project and don’t finish them right away.

Instead, I’m falling in love with the quick satisfaction of sewing baby clothes!  Dresses, shorts, bonnets… every type of clothing is fair game!

First up dresses… I am in love with the Geranium Dress Pattern from Made by Rae.  First, I tried the free sample version in the 0-3 month size.  It sewed up so quickly and looked so cute! 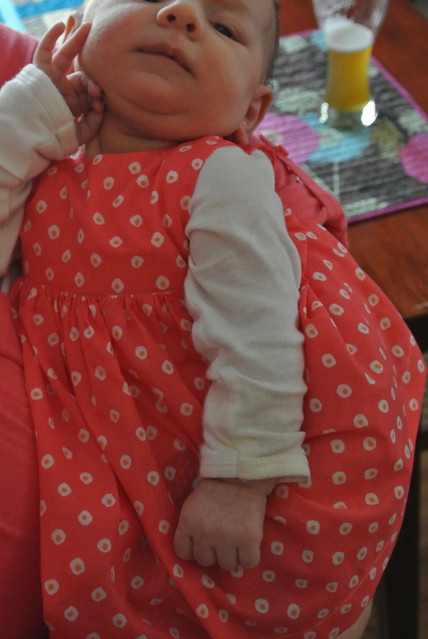 Next came the 3-6 month for summer… I can’t wait to have her wear this up in Rhode Island on vacation.  She will be very dapper at the beach. 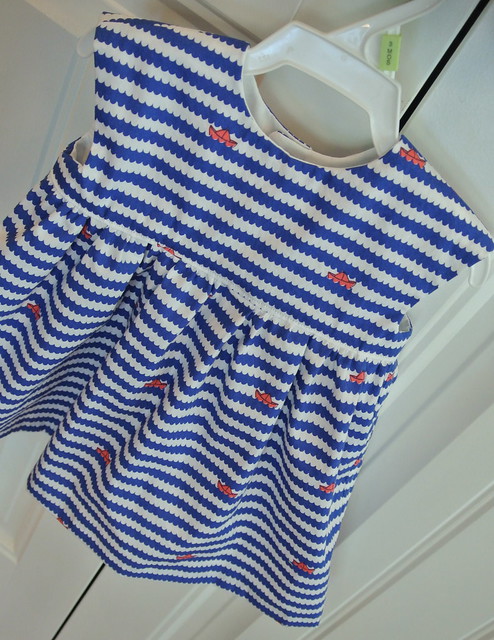 Then I just couldn’t stop!  I made the 6-9 month in a pretty floral pattern – Lisette from JoAnn’s Fabric.   I figure we live in North Carolina, so it stays warm longer.  She will still be able to wear this in the fall. 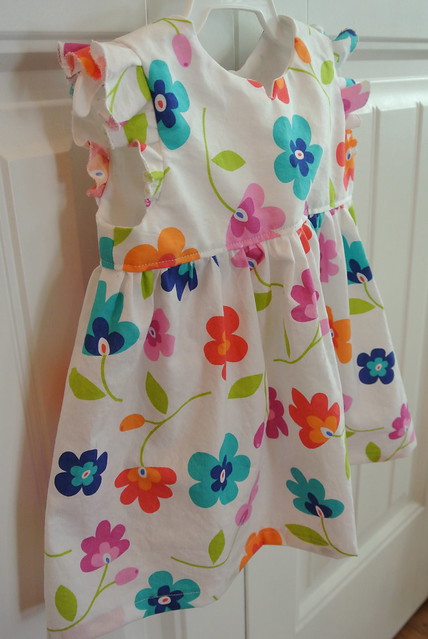 Then my poor little girl’s head was bare in the hot sun this summer.  That required bonnets to keep the sun out of her face as well meaning bystanders wanted to hold her and didn’t pay as much attention to the shade as I do.  I used the design from Little Betty Designs to make a reversible bonnet for my baby girl.  This is the 0-6 month size on a 3.5 month old.  It fit her well, but now a month later it was getting small, so I made it again with a smaller seam allowance and this larger version will fit probably through the summer. 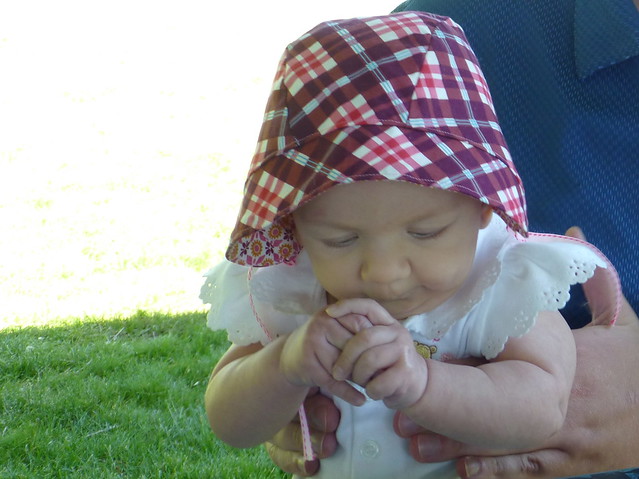 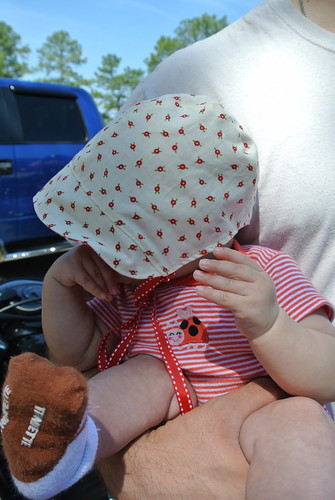 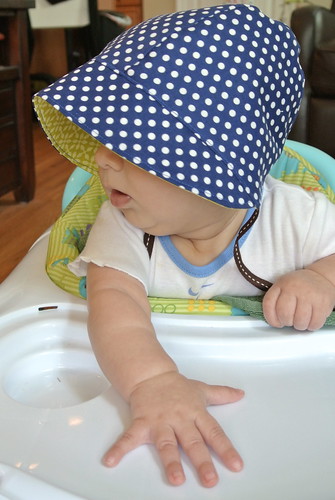 Then on to shorts, because it is too hot here to put pants on those cute little chubby legs! These are made from the pattern by Elegance and Elephants. The smallest size in the pattern was 6-12 months, so these were downsized to fit my 4 month old. The main challenge of this pattern was that it assumes you have a serger. I wish I had known that before purchasing the pattern as I do not own a serger. Therefore, I had to finish every seam. I think it turned out even nicer this way, but it did take quite a bit longer to finish. 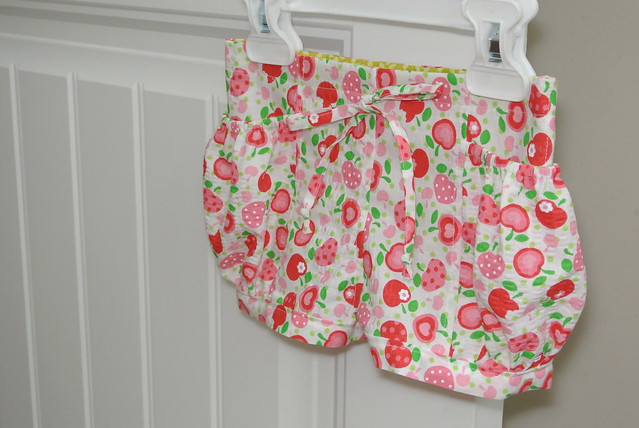 This summarizes my summer sewing so far… I’m loving the adorable clothes to make for kids.  It will be even more fun as she gets into walking so these creations can be seen better.  Maybe next on the schedule will be some quilty goodness!